Star trails over Cornwall – an experiment in image stacking 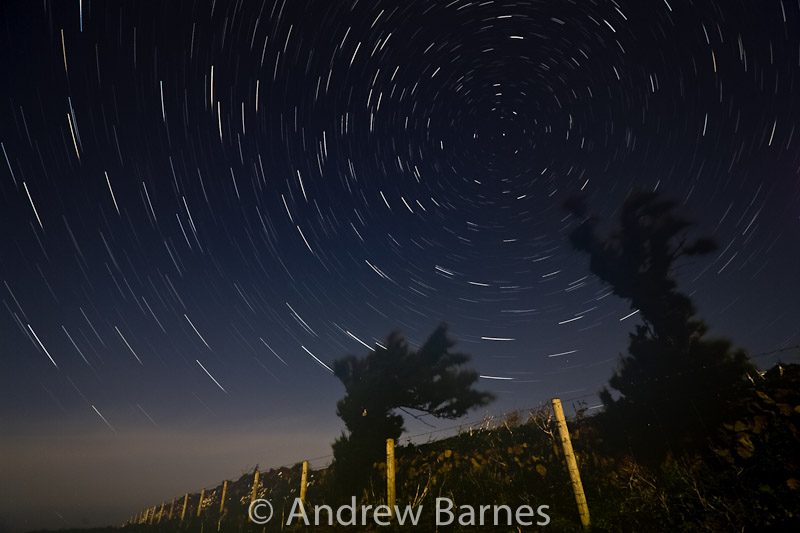 This is a short article of my first experience of trying to capture star-trails. The whole thing didn’t quite go as planned, but I will share my experience with you in the hope that you can learn a little from it.

I had decided to try a technique for taking star-trails images by ‘stacking’ a number of short exposures using dedicated software.

There are two main reasons, I think, behind the idea of taking multiple shots rather than a single long exposures. The first is noise reduction – a 40 second exposure, even at ISO 400, will have very little noise compared to a 40 minute exposure. So by using software to ‘stack’ the multiple, short exposures you can end up with an image that is dramatically clearer and less noisy than a single long exposure.

The other reason for stacking exposures is for fail-safe reasons, as I will explain later. If something goes wrong with one or more of the exposures, you can still salvage a useful image using the remaining exposures.

I set a Canon TC-80N3 remote timer to take 99 shots (the maximum that the timer can be programmed to take) of 40 seconds duration, with a 5 second lag between shots. This 5 second delay between shots was a mistake, I now realise, but more about that later. If everything went according to plan, this would allow me to record the equivalent of 66 minutes worth of star trails over a period of about one and a quarter hours (the five second lag between shots adds another 8 1/4 minutes to the length of the shoot).

Lastly, I set the camera to ISO 400, and an aperture of f5.6. I was using a full-frame Canon 5D digital SLR with the 17-40mm f4 lens, so f5.6 was close to the maximum aperture. I left the camera in Bulb mode, as the timing of the exposures would be handled by the TC-80N3 timer. I was also using a BG-E4 battery grip, which easily coped with over an hours worth of long exposure shots. Although I have yet to test this, I have read that the battery grip ought to allow you about two hours worth of such shooting.

All set. I walked up the road to the farm, easily finding my way in the light of an almost-full moon. Up across a couple of fields, past subdued and puzzled sheep, through a gate and there was my target: a couple of stunted trees growing by stone wall, bent by the prevailing winds.

It only took a couple of minutes to set up the tripod and camera, as I had made sure the camera was set before leaving the cottage. I opened up the lens to its widest focal length of 17mm, and checked through the view finder that the Pole star was visible, as well as the trees in the lower foreground. Perfect. Focus was the only real gamble, and all I could do was switch to manual and set rotate the focus collar on the lens until it was set to infinity.

One last step before starting the timer. I needed a so-called Black Frame reference exposure which the star trails software could use to subtract ‘typical’ noise from the final image. So, I took a 40 second exposure with the lens cap on, counting off the seconds on my watch by the light of the moon.

All set! I pressed the start button on the interval timer, hooked the timer careful around the tripod head, and stepped back. Now…how could I pass the next hour or so? I could go back to the cottage, it was near enough. But I didn’t fancy making the walk through the dark twice over. Instead I walked to the edge of the field, hopped over the wall (all right, gingerly and very carefully climbed over the wire fence with barbed wire on top, before scrambling over the dry stone wall) and sat down by the coastal path on the other side. Twenty yards away the ground dropped away suddenly down to the cliffs, and I could hear the rush of the sea below. I leaned back against the wall and looked up. Let’s see…Orion’s Belt. Yup, there it is. Umm…the Great Bear, pointing to the Pole star. Yes. Er…Cassiopeia? I think. And that’s it. Never mind, the spectacle was enough, and time passed quickly.

After half an hour or so I noticed that a slight sea mist had built up. The sky directly overhead was still clear, mostly, but nearer to the horizon the mist had obscured any views. Worst of all, I discovered that the mist had caused heavy condensation on the camera and lens, resulting in over 50 of my 99 images being essentially useless. Oh well…

However, my decision to make an image from 99 short exposures rather than one long exposure meant that I was able to salvage 45 or so clear images and stack them to create the image that you can see here. The total exposure time is only about half an hour, rather than the hour I had hoped for, but it is interesting that you can see such a definite effect of the earth’s rotation is such a short time.

For making the composite image itself I used Startrails software from www.startrails.de. It seems to be very easy to use – load all your images, add the black frame reference shot, press a button and the image is built up in front of your eyes.

One last thing – be careful with leaving too long a gap between exposures. You would be surprised by how much the earth can turn in just a few seconds. I found that there were regular discernible gaps in the trails of stars furthest from the Pole star i.e. those stars which appeared to move most during the exposure. I think that this was solely caused by the 5 second gap I left between exposures; next time I shall reduce the gap to a second, and so I hope get smoother star trails.

I was fortunate in being able to shoot these star-trails in a sparsely populated area on the North Cornish coast, where light pollution from nearby towns and villages could be avoided. However, as the population density of our island increases and urban areas spread we are losing our countryside darkness. If you would like to know more about the problem of light pollution in England and how you can help prevent its spread then please visit the CPRE‘s (Campaign for the Protection of Rural England) web page on light pollution.

A technical update to the star trails article » Andrew Barnes Photography - […] Since writing about my first attempt at creating a star trails image I have carried out a few further experiments, and thought about what went wrong and what I would do differently next time. […]